Electron correlations and topology are well established as engines for surprising and potentially functional properties. Strong correlations promote quantum fluctuations, which engender abundant phases of matter and various quantum phase transitions. Meanwhile, extensive developments have taken place in noninteracting electron systems, especially those with sizable spin-orbit couplings. It can reasonably be expected that the intersection of these two fields will be especially fertile in breeding novel quantum phases.

In this vein, recent experimental results provide the foundation to build a general non-perturbative framework in order to treat the interplay of correlation and topology and design both phases and materials of correlated gapless electronic topology. 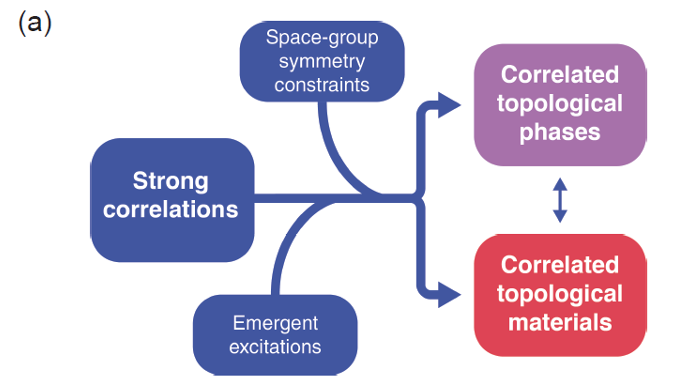 Now, a team of researchers proposes 1 a new hypothesis on which base that general framework, namely that strong correlations cooperate with crystalline symmetry to produce such states. Specifically, strong correlations would give rise to emergent excitations at low energies. The space group symmetry would constrain these excitations, leading to emergent topological phases while enforcing their gapless nature.

This hypothesis is counter-intuitive, though, because strong correlations tend to cause localization and gap out electronic excitations. But, if valid, it would provide a materials design principle for correlated gapless electronic topology.

To test the proposed materials design principle, it is important to go beyond toy models and explore correlated systems with general space group symmetries that may promote different types of nodal electronic states. For this reason, the researchers consider a Kondo lattice system that contains mirror symmetry.

Allowing for inversion-symmetry breaking, the team demonstrates the cooperation of strong correlations with space group symmetry in producing a novel phase – a Weyl-Kondo nodal-line semimetal.

Importantly, the analysis of correlation-driven topological semimetal phases gives rise to a general procedure to design new materials that realize such phases. This design principle for materials is put into practice by identifying several new candidate Ce-based correlated-topological semimetals, illustrating how it can be used to identify many new materials. The researchers synthesized single-crystalline Ce2Au3In5 and provided new experimental results to support the theoretical prediction.

More on the subject:
Discovering topological materials from symmetry
27% of all materials in nature are topological. And now there is a catalogue

27% of all materials in nature are topological. And now there is a catalogue

From protein design to materials design