The absence of mirror symmetry, or chirality, is behind striking natural phenomena found in systems as diverse as DNA and crystalline solids. A remarkable example occurs when chiral semimetals with topologically protected band degeneracies are illuminated with circularly polarized light. In circularly polarized light, the tip of the electric vector describes a circular helix about the direction of propagation with a frequency equal to the frequency of the light, with the magnitude of the vector remaining constant. Under the right conditions, the part of the generated photocurrent that switches sign upon reversal of the light’s polarization, known as the circular photogalvanic effect, is predicted to depend only on fundamental constants (e, h, c, ε0).

Circular photo-galvanic effect (CPGE) exists only in chiral crystals that alter the helical movement of electromagnetic radiation when it goes through them. Its transverse component, where the current flows perpendicular to the light propagation direction, is by far the most commonly observed. In contrast, the longitudinal one (LCPGE), where current flows parallel to the light propagation direction, remains more elusive since its discovery in tellurium in 1979. 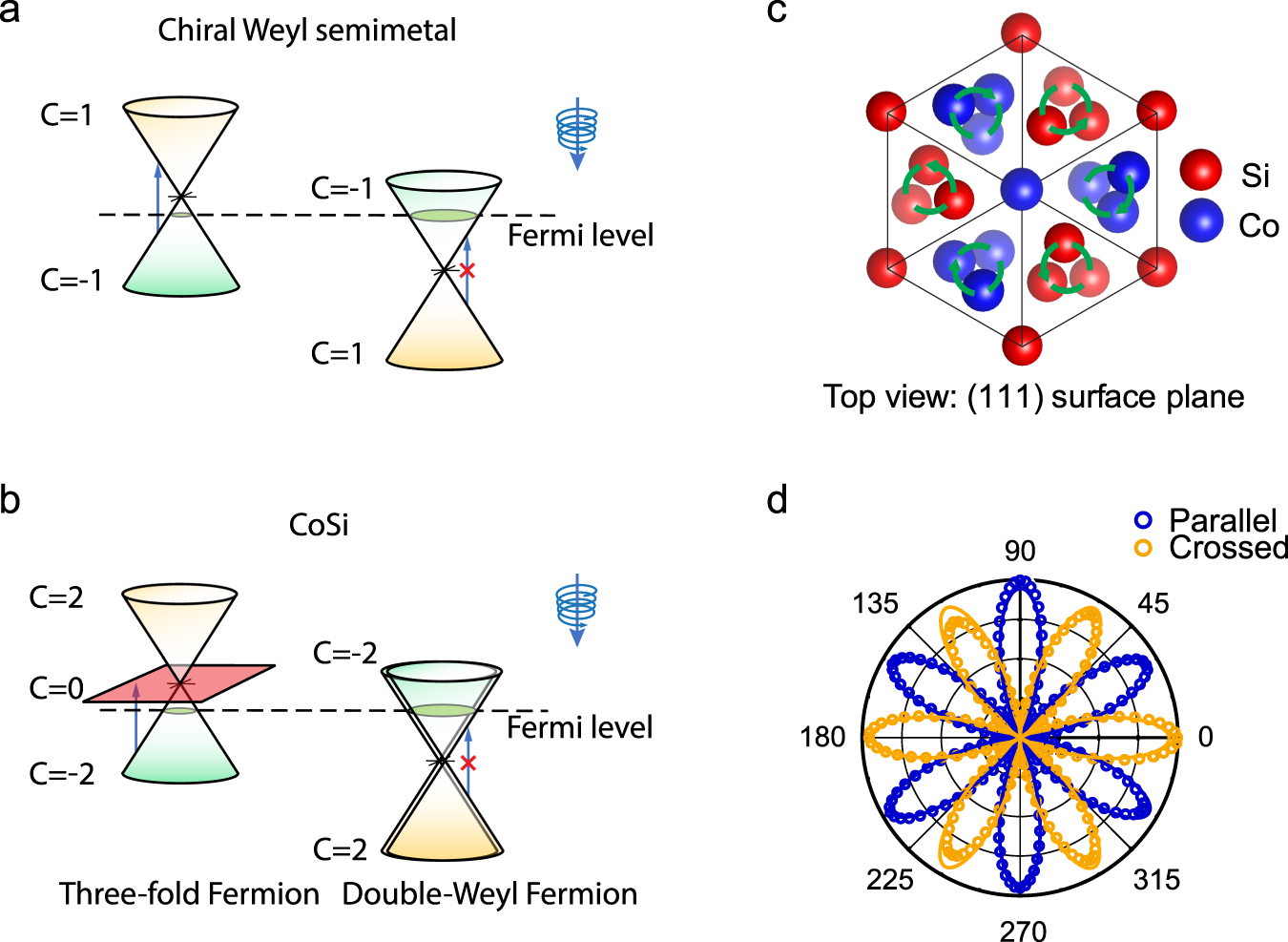 In chiral topological semimetals, the LCPGE is particularly remarkable because it was recently predicted to be quantized. Observing this quantization experimentally is not trivial, though. In this family of materials, the presence of spin-orbit coupling leads to a splitting of the nodes, which leads to a predominantly non-quantized effect. Therefore, a small spin-orbit splitting is advantageous to observe the quantized CPGE in multifold materials. Now, a team of scientists has measured 1 the CPGE in CoSi, as this material has a relatively small spin-orbit coupling.

The researchers measure the CPGE by detecting radiated terahertz pulses emitted from the illuminated regions, a method with several advantages compared to DC current measurements. The new development allows measuring terahertz emission in the mid-infrared regime for the first time. Using this capability CPGE in CoSi is measured across a broad range. This way, the scientists identify a large LCPGE in the mid-infrared regime. First-principles calculations establish a purely topological origin of the LCPGE peak. A k⋅p model, including quadratic corrections to the dispersion of the nodal bands, helps define the conditions under which the quantization could be observed in future experiments.

These results indicate that CoSi could potentially be used as a new mid-infrared detector based on a topological mechanism if the hot-carrier lifetime could be increased to around 1 ps, as observed in other semimetals.