A hug is a form of non-verbal communication. It can indicate familiarity, love, affection, friendship, brotherhood, or sympathy. We use it when we want to convey support and comfort, especially when we feel that words are insufficient. Sometimes it arises from joy, when we are reunited with a friend after a long time; sometimes from shared grief, at a funeral; sometimes from love, when one partner arrives home and meets the other; sometimes from sadness, as when we say goodbye to someone at the airport whom we will not see again for a long time. It usually demonstrates affection and emotional warmth and unlike other types of physical contact, it can be practiced in public and in private, carries no stigma in most countries, religions and cultures, and implies a greater degree of trust and friendship than other bodily gestures, such as handshaking. 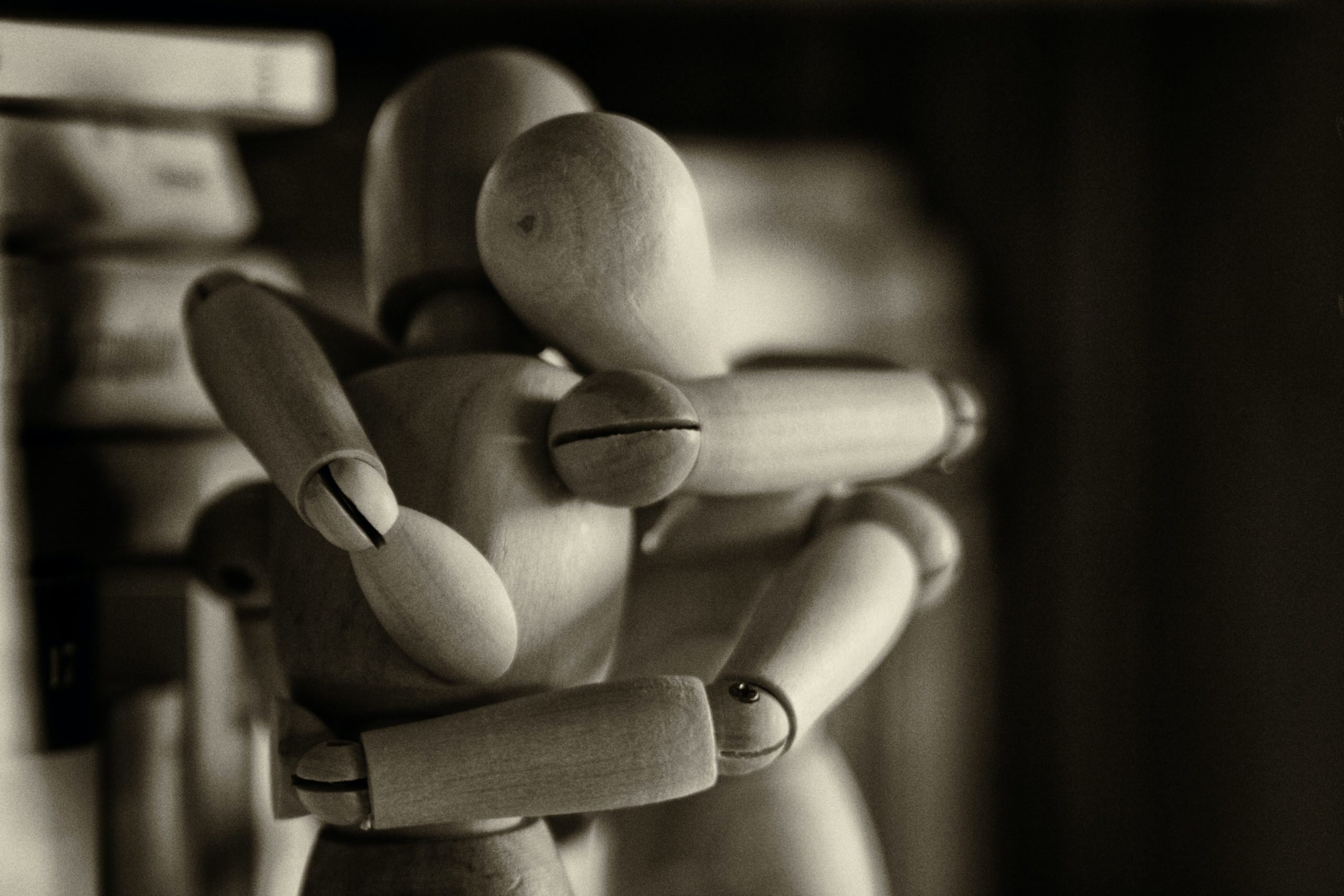 Hugging involves wrapping the arms around each other’s body, usually reciprocally, and is a tactile message. Receptors in the skin of the two people send signals to the brain through the vagus nerve that informs the nervous system of a pleasant sensation indicating trust, protection and absence of danger. The nervous system releases serotonin, the neurotransmitter that elevates our mood and makes us feel good, releases endorphins, which give us a feeling of pleasure and also oxytocin, the bonding hormone 2. The response is that of a pleasant and safe situation, the nervous system relaxes, the heart rate and blood pressure decrease: we lower the amount of stress hormones, such as cortisol, and the brain produces alpha waves, those related to moments of calm and tranquillity. On the other hand, since our feelings of psychological pain are processed in the same brain regions as our feelings of physical pain (especially the brain areas known as the anterior cingulate cortex and periaqueductal gray), endorphins dampen our psychological pain. That is why a hug is comforting when we are sad (3).

The pandemic is now leading to a lack of hugs. We miss them, we long for them very much. We Spaniards tend to touch each other, shake hands, grab each other’s arm, pat each other on the back or thigh and yes, we hug. We do it with our parents, siblings and children, with our best friends, with our partner, with anyone with whom there is a relationship of affection. But now, among the basic strategies against the coronavirus are confinement and social distancing and that means no touching, no hugging. The Anglo-Saxons, who hug much less than we do, have considered it a neurological problem and have called it the “skin hunger”, the biological need for physical contact. It is the reason why babies in neonatal intensive care units are placed on their parents’ bare chests. It’s why prisoners in solitary confinement often say they crave human contact as much as freedom.

A Japanese eager for hugs can go to a soineya, a locale where for a fee you can choose from a twenty-minute hug to spending the night sleeping cuddled up next to someone (I said sleeping). And if you are one of those who think about sleeping attached to a stranger makes you shiver with panic, remember that among the actions against the Brexit was included a campaign titled #hugabrit where it was proposed to send photos hugging a Briton and generate “a love bomb across the English Channel” 3. With such a great idea it’s hard to understand why the British ran away, distancing themselves from these Mediterraneans who don’t know how to keep a respectable social distance.

It’s part of our culture. Tiffany Fields, director of the Touch Research Institute at the University of Miami told Anne Strainchamps in an interview that they had done a study comparing how often couples in a café in the United States and in France touched each other. In the U.S., it was about once every 30 minutes. In Paris, it was twenty times every 30 minutes (4).

Human touch is biologically necessary. Being touched makes humans feel calmer, happier and saner. Slow stroking stimulates a part of our nervous system, the c-tactile afferent nerves, which are found in the skin and are quite different from the usual nerves that transmit information about touch, pain and pressure. These neurons only respond to light and slow strokes. In contrast, the lack of physical contact generates physical and emotional wear and tear, a situation of deprivation. Young children need affection and contact for normal neurological development. Concepción Arenal was right when she said that “the child needs caresses to be strong and to be good”. We are social beings, animals that need to be in a group to feel good and increase our chances of survival. It is the tribe that educates the child, but it is also those who hunt together, those who eat together, those who share each other’s joys and sorrows, those who embrace each other.

Skin hunger is a biological problem. When we are in danger or with anxiety, being touched is a form of help, while lack of contact increases the stressfulness of difficult situations. Scientific studies have shown that people perform tasks better when they are previously patted on the back, a form of reassurance that probably dates back to the caregiver’s caresses as a child. But chronic stress, abnormally high levels of cortisol over a long period of time, damages the nervous system and the immune system. In the brain, neuronal damage has been seen in the hippocampus, which affects memory and learning. Cortisol also kills natural killer cells, the “natural killers” of the immune system (5). The problem is that these cells are part of our defenses against viruses, which is crucial in this day and age. Some people think that one of the ways in which supporting the sick can improve their chances of survival is that hugs and cuddling increase the number of natural killer cells and that increase improves our chances against infections and cancer. In fighting contagions, we have lost that in this era.

There are many people who have that hunger for hugs. A study by Tiffany Field and her group found that 26% of respondents felt very deprived of contact while 16% felt moderately deprived. 4 This lack of physical contact can cause a decrease in serotonin, and when serotonin levels drop there is a greater risk of insomnia, anxiety and depression. There are those who soothe those needs for physical contact with the people they live with but many live alone and have no choice but pets or nothing. We have also realized that while our technological tools are very focused on transmitting visual and auditory information, there are virtually no devices that allow interaction through touch. Prototypes of haptic technology, that based on touch, have been developed for two fields: for cybersex and to improve sensations in the world of video games 5. However, these haptic advances are still very preliminary, expensive, crude and not very widespread.

One difficulty of haptic systems is that they require fast and precise coordination of sensory information and motor information. When we hug we use an activation of numerous muscles with a given level of contraction. We neither want to hurt nor do we want our gesture to go unnoticed or unpleasant, like those handshakes that seem to offer us a dead fish instead of a warm hand. At the same time we pick up a lot of sensory information on our skin (pressure, heat, textures, etc.). It’s not easy and, in fact, even the best systems currently available can’t reproduce the sensation of a caress.

So what can be done to improve that sensation of lack of cuddling in what we still have left? One basic strategy is to get our skin to move, to be stimulated, to receive sensations. It can be doing some kind of sport, something as simple as walking stimulates the pressure receptors of the skin in our feet, it can be massaging our head or rubbing our body with a moisturizing cream.

And what will the return to the longed-for normality be like? Some people think that in a few weeks we will have left everything behind like a bad nightmare, the human being has an amazing capacity for plasticity and recovery. Others believe that we will try to make up for lost time and we will have a new happy 20’s full of debauchery and hugs. Finally, there are those who think that we will have changed, that we will have become Nordic, that physical contact will have become much less common and that many people will continue to maintain social distancing, even though we already have the coronavirus at bay. I think that as in the old saying we will look at each other and say “Who came, who didn’t hug?” and throw ourselves into each other’s arms.

Why smoking pot makes you hungry