At a synapse, the plasma membrane of the neuron transmitting the information (the presynaptic neuron) is in close proximity to the membrane of the target cell (postsynaptic) and the two are separated by a space known as the synaptic cleft. Both the presynaptic and postsynaptic sites contain extensive assemblies of molecular machinery that link the two membranes and carry out the signalling process. Prominent in the presynaptic portion are proteins involved in the storage, release and reuptake of the neurotransmitter and in the postsynaptic portion, receptors, which are specific proteins to which the transmitter binds. 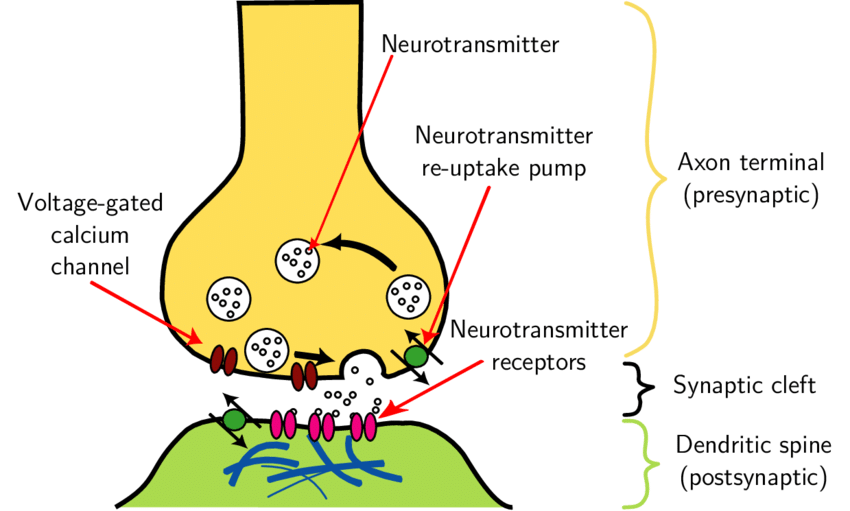 In many synapses, the presynaptic part is located in an axon and the postsynaptic part in a dendrite or soma. Many dendrites have lollipop-like expansions of their surface that are characteristic postsynaptic sites and are known as dendritic spines. By counting dendritic spines, something that can be done by light microscopy, we can get a realistic estimate of changes in the number of synapses. Since approximately 90 percent of excitatory synapses are located on dendritic spines, changes in their number and morphology could affect the regulation of synaptic transmission and neuronal structural plasticity in general and may be related to the atypical brain communication shown by people with autism spectrum disorders (ASD).

A group of Italian researchers have published a paper 1 in the journal Nature Communications in which they point out that there is an excess of synapses in the cerebral cortex of people with autism. Many of the genes implicated in autism are involved in the control of protein translation and synthesis, but also in the structure, function and plasticity of synapses. Multiple ASD susceptibility genes converge on cellular pathways that are involved in the postsynaptic site of glutamatergic synapses.

A previous study 2 had found a higher density of dendritic spines in pyramidal cells in the cerebral cortex of people with ASD compared to age-matched control cases. The two researchers studied pyramidal cells in the superficial and deep cortical layers of the frontal, temporal and parietal lobes. The highest spine densities appeared predominantly in layer II of the various cortical regions and in layer V of the temporal lobe. Increased spine densities were associated with reduced brain weights and were found more frequently in individuals with ASD with lower levels of cognitive functioning. 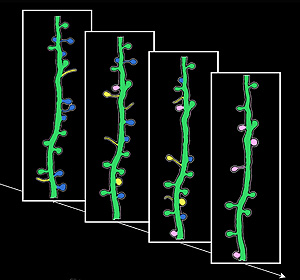 During early development, the brain produces an excess of synapses and subsequently eliminates those that are unneeded, altered or inactive in a process known as “synaptic pruning”. These synapses are eliminated in a process of autophagy, in which brain microglia eat the altered or inactive synapses. The postnatal development of synapses in the mammalian cerebral cortex is a dynamic process that involves simultaneous formation and pruning. At early ages, synapse formation exceeds pruning, resulting in an excess of excitatory synapses, essential for the structuring of neural circuits. Subsequently, synapse elimination exceeds formation, resulting in a net pruning of spines from infancy to adolescence. Dendritic spine density peaks in early infancy and is followed by a steep decline during late infancy and adolescence to adult levels. This process causes the selection and maturation of synapses and neural circuits.

Changes in synaptic structure and synapse number have also been seen in multiple mouse models for ASD, including mouse models of Rett syndrome, fragile X and 15q11-13 duplication, as well as mice deficient in the CYFIP1 (cytoplasmic FMR1-interacting protein), CNTNAP2 (contactin-like protein), DLGAP2 (DLG-associated protein 2) and SHANK1 (SH3 domains and multiple ankyrin 1 repeats) genes. However, these are not always results in the same direction, indicating increased spines and synapses in the “autism” mice versus control animals. The C58/J strain of mice shows low sociability, impaired communication and stereotyped behavior; therefore, it is considered among the animal models suitable for the study of idiopathic autism. A study by Mexican researchers 3 has analyzed differences in the number and morphology of dendritic spines in the hippocampus and prefrontal cortex of C58/J mice. The researchers found changes in spine number and morphology in a brain region-dependent manner: a subtle decrease in spine density in the prefrontal cortex, a higher frequency of immature phenotype spines characterized by filopodia-like length or small morphology, and a lower number of mature phenotype spines in the hippocampus. These differences between what is found in these mice and what is observed in human brain tissue exemplify the difficulties of using murine models for a disorder such as ASD.

Observations thus far in individuals with ASD have led to the hypothesis that dysfunctional synaptic pruning and altered homeostasis may contribute to the pathology of ASD. Postmortem histological examinations support this idea, as the presence of increased density of dendritic spines has been repeatedly observed in the brain tissue of patients with ASD.

The higher densities of spines in people with ASD provide structural support for the hypothesis that there are changes in synaptic circuitry in the cerebral cortex, and that these modifications may lead to altered functioning of brain activity.