Thomas C. Südhof (Göttingen, Germany, December 22, 1955) is a neurobiologist awarded in 2013 with the Nobel Prize in Medicine for his studies on the trafficking of vesicles in the cell. Südhof has just published an article in the journal Cell, one of the best in the world, about neurexins, one of the most interesting proteins in research on autism.1

Synapses are structures of union and communication between neurons. They are formed by a presynaptic element and a postsynaptic element, parts of two different neurons. That is to say, in the synapse the information jumps from one neuron to another and the second is excited, inhibited or equal, depending on the action of the first one and the receptors in the second one. The synapses allow the transmission and computation of information, making the neurons connect in billions of circuits, networks that present numerous overlaps and that are intensely interdigitated with each other. How from that incredible tangle arise thoughts, feelings and memories is one of the most amazing questions of modern biology.

During development, neurons are born, migrate and extend their axons, often over long distances to reach their specific targets. Then these axons form synapses on these other postsynaptic neurons and they form neuronal circuits. Synapse formation has three basic components: recognition of the target cell, organization of the basic components of the synapse such as synaptic vesicles and active zones and, finally, the specification of the properties of the synapse, such as identity of the transmitter, probability of vesicle release, composition of the postsynaptic receptor area or competence for short and long-term plasticity. The formation of synapses is very often followed by the elimination of the synapse, which means that there is constant turnover and that many more synapses occur than finally exist: in adolescence, 40-50% of the synapses are eliminated. The formation of synapses, on the other hand, does not show a single «end product» but instead generates a continuum of synaptic states from initial contacts to different types of mature synapses.

It is a curious spatial pattern: the neurogenesis of projection neurons and the formation of long-distance axonal pathways are phenomena restricted to the stages of development while synapses are formed and eliminated throughout life. Neurons lose between 5 and 10% of the synapses each month depending on the age of the animal and the type of neuron, but some replace 40% of the synapses each month (for example, the synapses of layer VI neurons over layers I and II neurons in the sensory cortex of the mouse). The newly formed synapses are less stable than the mature synapses and are those that are normally exchanged. Although there is a certain dependence on the activity, it is actually a very low effect and the importance of the activity of a circuit on the formation and elimination of synapses is surprisingly modest. On the other hand synapses are amazingly plastic and they can change not only their strength but also, for example, the neurotransmitter they are releasing.

There are two characteristics of neural circuits that are striking. The first is that the map of the synaptic connections of a given circuit (the wiring diagram) does not allow to predict the relations of inputs and outputs because the synapses have plastic and diverse properties. That is to say, synapses are not linear units of information and process in a specific way the information encoded by the firing patterns of the presynaptic neuron. This transformation of the action potentials of the presynaptic neuron in the signals of the postsynaptic neuron in the thousands of synapses of input and output of a neuron varies dramatically between different synapses depending on their properties and their plasticity and, in addition, is modulated by diffusible signals (e.g., endocannabinoids) and by modulatory inputs (e.g. dopamine and serotonin). The result is that a neuron integrates multiple signals in a discharge pattern of action potentials, which in turn is transformed into an output signal that not only varies between different neurons but also among thousands of synapses of the same neuron.

The second is that most brain cells participate simultaneously in many different circuits, not just one, and it is often very difficult to identify the different circuits in which a particular neuron participates. The usual approach to analyzing circuits is to monitor the activity of a specific type of neurons during a specific behavior, determine the effects on that behavior of silencing or activate these neurons and third, to map the synaptic connections of the neurons analyzed. However, the data we obtain with these experimental strategies does not allow us to understand how a synapse works within a neuronal circuit nor to know what other neurons of the circuit do and how each synapse of each neuron contributes to that behavior. 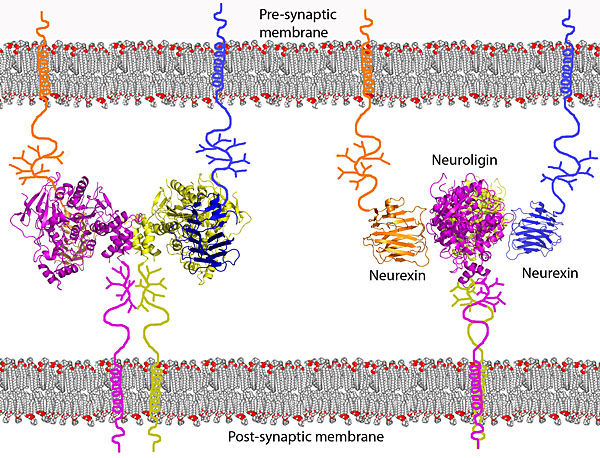 Südhof argues that the establishment, properties and dynamics of synapses are governed by a molecular logic that is controlled by different transsynaptic signaling molecules; that is, there are pre- and post-synaptic elements that link together and that determines where a synapse is formed, between which neurons, how that synapse acts and what results from its action in the postsynaptic neuron. Südhof focuses on this review in neurexins for three reasons: they are the molecules of the synapse of which there are more in-depth studies; they are a fundamental element in different disorders including autism and, third, they can be a perfect example of the whole set of synaptic interactions. Neurexins have an extracellular domain that interacts with other proteins in the synaptic cleft, in particular with neuroligins. Neurexin and neuroligin “shake hands” which establishes the connection between the two neurons and the formation of a synapse.

Neurexins are highly conserved proteins during evolution that are expressed in thousands of different isoforms by alternative splicing. That is, under “basic” conditions, a DNA gene generates a messenger RNA, which is translated into a protein. But for some genes, including the three that in mammals encode neurexins, messenger RNA is processed in many different ways, different processes are made that eliminate part of the sequence and the result is that the proteins that are formed with those alternative mRNAs are different, what we have called isoforms 2. The enormous variety of neurexins is a central component of that dynamic code of synapses. In addition, the neurexins are presynaptic and can be attached to different postsynaptic elements, thus regulating the properties of the synapse. Among the different types of postsynaptic ligands are the neuroligins, the cerebelin / GluD complexes and the latrophyllins. These unions modulate the relationship between the inputs and outputs of the neural circuits of which they are a part.

In 2007, a study of the DNA of 1168 families where there was at least one case of autism was carried out and an involvement of a region of chromosome 11 was found. In this region is located the neurexin I gene, which is active during the early development of the brain.

Neurexins are the nucleus of transsynaptic signaling networks that control the properties of the synapses and thus determines the exact responses of the synapses to the action potential patterns of a neuron. These are circuits that are vulnerable and have to do with the appearance of an autism.

Recent advances in microarrays and DNA sequencing, combined with the collaboration of patients and their families, have allowed a look as never before on the genetic and molecular basis of neural disorders. These studies have generated three surprising discoveries: first that the human genome is strikingly fluid. One example is the presence of deletions and duplications of DNA, which generate the so-called variations in the number of copies (CNVs) that occur regularly in each new generation, producing a genetic dynamic that no one expected. Second, mutations in many different genes predispose for many neural disorders, probably hundreds of genes in cases of autism and schizophrenia. Third, for many mutations, clinical presentations vary greatly from one affected person to another despite having a similar mutation. There are also problems: it is often found that a mutation is associated with a disease but is given less importance when it is seen that it is also associated with other disorders when it should be considered a sign that there may be a common step affected and that gene should receive more and not less interest. Another problem is that many studies approach a disorder with a technique, for example a microarray analysis to detect CNVs or an exome sequencing to detect point mutations instead of trying to systematically sweep the genome of a population of patients with an experimental approach that uses multiple techniques This would avoid the situation in which we find ourselves where it is often difficult to compare the results of some studies with others. Finally, in many of the identified genes, its function is not known, so we are in the situation of trying to evaluate the importance of the mutations and the relationships between the affected genes without having direct data. Maybe the way is to accept that the list of genes is only a first step and that discussions and speculations about its importance should be postponed until we have a more complete picture of the genetic landscape of a disorder such as autism.