Graphene is an exceptional material with attractive properties to explore fundamental physics and for use in technological applications. While ideal graphene is non-magnetic, custom-shaped graphene nanostructures can be designed to exhibit complex magnetic phenomenology, with promising possibilities for a new generation of nanoscale spintronics devices.

In fact, graphene π magnetism is more delocalized and isotropic than conventional magnetism arising from d or f orbitals, which makes it electrically accessible and stable even at room temperature. The intrinsically weak spin orbit and hyperfine couplings in graphene lead to long spin coherence and relaxation times as well as a long spin-diffusion length even at room temperature. This makes graphene an interesting platform for designing functionalities such as spin filters, spin
qubits, and electron quantum optics setups.

Graphene nanoribbons (GNRs), are strips of graphene with ultra-thin width (<50 nm). GNRs are very interesting structures, partly due to their attractive electronic properties. Those properties vary dramatically with changes in the nanoribbon’s atomic structure in terms of width, crystallographic symmetry, dopant heteroatoms, and edge termination. GNRs have emerged as particularly attractive building blocks for molecular-scale electronic devices because they inherit some of the exceptional properties from graphene while having tunable electronic properties, such as the band gap dependency on their width and edge topology.

The advent of bottom-up synthesis has open the path to defect-free GNRs, assembled by on-surface reactions of molecular organic precursors over a metal surface. These strategies rely on the careful design of suitable molecular precursors with specific shape and chemical composition to steer a step-wise reaction on a metal surface, leading to extended and atomically precise GNRs. An ample library of precursors and reaction pathways has been constructed in the last years, incorporating successful examples of precise control over the GNR’s width, orientation and edge topology. Long defect-free samples of narrow GNRs can now be chemically this way, as demonstrated by armchair and zigzag (ZGNR) ribbons.

Furthermore, manipulation of GNRs with scanning tunnelling probes opens the possibility to build two-dimensional multiterminal graphene-based electronic circuits, where their spin properties can be addressed by using spin-polarized tips and probed by shot noise measurements.

Most recently, crossed GNR junctions have been proposed as electron beam splitters for electron quantum optics. It has been found that by placing one GNR on top of another with a relative angle of 60°, the electron transfer process between the ribbons is strongly enhanced. This enables one to split incoming low-energy electron waves between two outgoing ports with a tunable ratio and negligible reflection probability, an effect with roots in valley (chirality) preservation in the low-energy bands of ZGNRs. However, what role does Coulomb repulsion have in this process? 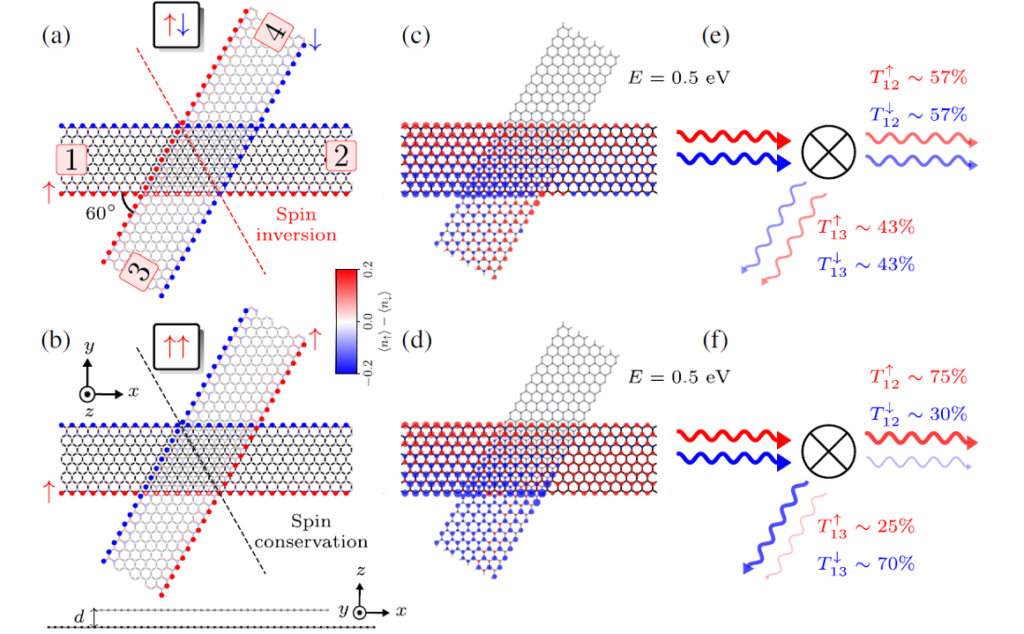 Now, a team of researchers analyzes 1 the electronic structure and quantum transport properties of junctions composed of two infinite ZGNRs crossed with a relative angle of 60° to answer this question.

Using the mean-field Hubbard model in combination with nonequilibrium Green’s functions to describe the open quantum systems, the researchers find that the beam-splitting effect
reported previously survives in the presence of Coulomb repulsions with two distinct modifications: a transport gap opens at low energies, and a spin-dependent scattering potential emerges. Except for specific high-symmetry configurations, this class of electronic devices is generally predicted to behave as spin-polarizing beam splitters with interesting possibilities for electron quantum optics. By constructing arrays of junctions, the spin-polarizing effect could be enhanced.

These devices being ahead of current experiments, rapid progress in bottom-up fabrication and scanning probe techniques makes it conceivable to build them in a near future.