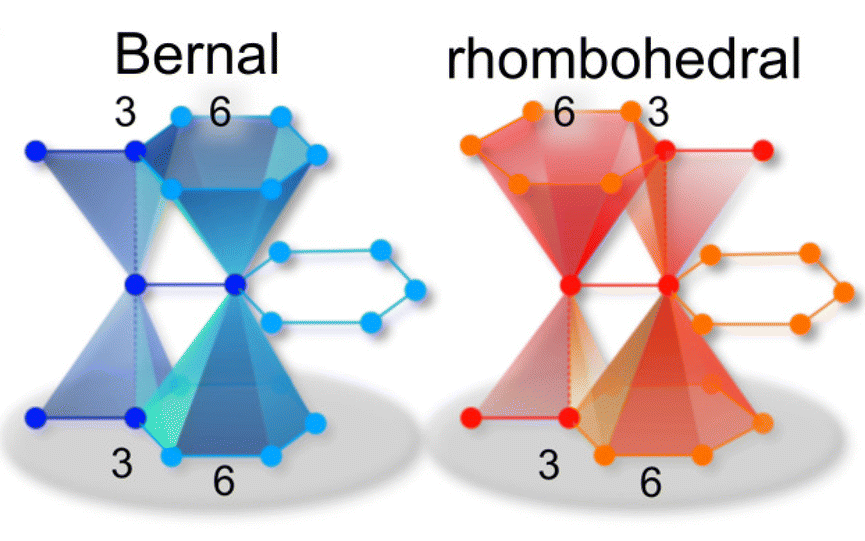 Graphene is a key two-dimensional material that continues to reveal intriguing properties when stacked into just a few layers. But the interesting point is that it is not just a question of a layer sitting on another layer randomly, but how exactly their atoms are positioned in relation to each other. In this vein, for example, bilayer graphene twisted in a precise angle has been found to exhibit superconductivity properties. Thus, how layers stack is most important and far from trivial.

Bilayer graphene can exist in the AB, or Bernal-stacked form, where half of the atoms lie directly over the center of a hexagon in the lower graphene sheet, and half of the atoms lie over an atom, or, less commonly, in the AA form, in which the layers are exactly aligned. Large graphene samples are obtained experimentally by mechanical exfoliation of graphite, so they are supposed to favor Bernal stacking, which for graphite has been considered to be more stable than rhombohedral stacking (ABC form).

However, this stability is far from being fully settled. Firstly, recent calculations have shown that graphite is energetically more stable in rhombohedral stacking, so it is suggested that crystal growing conditions under high temperatures and pressures in a geological scale are responsible for Bernal stacking in graphite. Secondly, experimental and synthesizing techniques in 2D materials have been so improved over the years that graphene is being investigated nowadays with a defined number of layers.

Research works that have focused on the same exfoliated sample of trilayer graphene simultaneously found regions with Bernal and rhombohedral stacking. Rhombohedral trilayer graphene is today being synthesized with a renewed interest to show its unique properties primarily due to flat band regions related to magnetism, superconductivity and other strongly correlated phenomena. The stability between the Bernal and rhombohedral stacking in few layer graphenes therefore stands as a crucial question to be discussed.

Techniques are currently being developed on how to obtain, preserve or change stacking in trilayer graphene. The phase change between rhombohedral (ABC) and Bernal (ABA) stacking can be induced by external driving forces. The ABC stacking was experimentally found when graphene layers were grown on SiC substrates, and it was stable up to a temperature of around 1200 °C when it reverts to the ABA stacking.

The researchers study different deformations that induced the energetic exchange between these stackings by looking at their relative stability. They first show that as the trilayer graphene ground state, the rhombohedral stacking is slightly more stable than the Bernal one. Then they perform several deformations in the quest to induce the transition from rhombohedral stacking to the Bernal one. In simulations, the scientists find that Bernal stacking is energetically more stable than the rhombohedral one under some distortions based on the planar expansion of the lattice parameters and their perpendicular compression. Under distortions such as shear and the atomic shifts in graphene sublattices, structural anisotropy helps to stabilize the ABA stackings in certain directions. These mechanisms point out that the stacking transition is achieved by breaking the sublattice symmetries of layer–layer interactions involved in each stacking.

These findings provide insights into the role of substrate-associated strains when graphene layers are integrated into devices, so that the stacking order and consequently their ultimate electronic properties are modified. Hence, different practical applications are possible, such as depositing samples in sandwiches, substrates, and molecule decoration, where stacking transitions may take place.

Disclaimer: Parts of this article may have been copied verbatim or almost verbatim from the referenced research papers

Quantifying the screening of electrons in graphene heterostructures