Predation is a biological interaction between a hunting organism, the predator, and another organism that is hunted, the prey. Predators may hunt actively for prey in pursuit predation, or sit and wait for prey as in ambush predators. In all cases, it is a complex behavior requiring honed skills and perfect and fast coordination among neuronal circuits that direct differentiated and harmonized skill sets. The act of predation can be broken down into a maximum of four stages: Detection of prey, attack, capture and finally consumption but two aspects are particularly crucial: pursuit and fatal biting.

The group of Han et al. from Yale University has published an article on Cell that beautifully explains the neural pathways for predation 1. They have found that the complex behavior of predatory hunting requires coordination between two functionally distinct neuronal pathways originating in the central amygdala, a nucleus in the medial temporal lobe. This nucleus receives varied types of inputs including sensory (visual, olfactory and auditory), somatosensory, thalamic and inter-amygdalar projections. The central amygdala is generally considered to be involved in the acquisition and expression of fear, threat-detection, motivation, anxiety, nociception and reward-related instrumental tasks 23. Now, they have demonstrated that is also involved in predation, being the control module for this behavior.

The research team used optogenetics, a biological technique which involves the use of light to control cells in living tissue, typically neurons, that have been genetically modified to express light-sensitive ion channels. Then, they can activate and deactivate populations of neurons at will. When no laser light was applied, the animals walked around their cages with a quiet and normal behavior. However, when the light was on, and the central amygdala was stimulated, the mice launch frenzied attacks on any living being or object in their path: live crickets, insect-like toys, sticks and even bottle caps. Thus, stimulation of central amygdala elicited hunting of live and artificial prey. After jumping on the “prey”, the mice grabbed it with their paws and repeatedly sunk in their teeth. (2). But the aggressive behavior was reserved fore preys, central amygdala activation did not induce attacks on conspecifics, greater food intake, or anxiety-like behaviors. Anatomical and electrophysiological analyses of the same regions confirmed the specificity of the optogenetic approach. 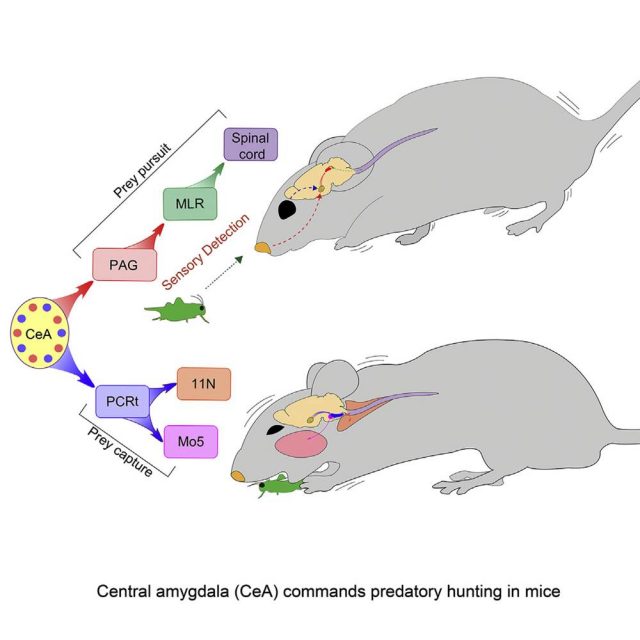 The research team found that there are two populations of GABAergic neurons involved in different tasks of predation. One subsystem from the central amygdala projects to the mesencephalic gray matter through the periaqueductal gray and control locomotion during pursuit of prey. The other controls cervical-mandibular movements and is responsible for the final outcome, fatal bites. The central amygdala integrates both craniofacial and locomotor modules during goal-directed behavior.

To further clarify both amygdalar pathways, the researchers then blocked the action of each set of neurons in turn. When they blocked the neurons responsible for prey pursuit, the mice were slow to chase but still able to bite. Conversely, when they blocked the biting neurons, the mice pursued the prey but could not deliver a killing bite. (2)

These findings demonstrate a neural circuit that integrates distinct behavioral modules and suggest that the central amygdala is a modular command system for predatory hunting. Neurons involved in biting are not only activated by excitatory inputs but are also disinhibited through the removal of an inhibitory input. This dual mechanism is suggestive because it opens a short temporal window during which excitatory inputs can be rapidly added and concomitant plasticity induced (3).

Another interesting observation is the function of the periaqueductal gray, and its role in the coordination of behaviors. Previous evidences suggest that depending on the context, periaquaeductal gray neurons may control defensive or predatory behaviors. How the same region determine antagonistic behaviors and whether they use similar subcircuits for both behaviors is presently unknown (3).

It is unclear also what activates both sets of neurons in free conditions. Although it is not demonstrated yet, previous authors and De Araujo, senior author in the present paper, have suggested that visual cues, such as small moving animals, are critical for triggering predatory sequences. (2)

Another open question is whether learning affects predatory behaviors. Some of them are clearly innate, but efficient predation is likely acquired through experience, trial and error learning as can be observed in many young animals. (3) Researchers have found evidence of similar hunting circuits in rats and other species, including humans, whose survival once depended on their ability to hunt and kill large animals.

This study has also an evolutionary perspective. Predation appears to have become a major selection pressure shortly before the Cambrian period—around 550 million years ago—as evidenced by the almost simultaneous development of calcification in animals and algae, and predation-avoiding burrowing. However, predators had been grazing on micro-organisms since at least 1,000 million years ago. It is plausible that the amygdala got involved in predation later, when vertebrates first developed necks and jaws. In fact, only the jawless lamprey appears to lack a differentiated ‘‘striatal’’ amygdala, i.e., a central amygdala-homologous, peptide-rich structure within the amygdalar complex. (1)

The emergence of articulated jaws was a major event in vertebrate evolution. The reconfiguration of the vertebrate head promoted the transition from filter feeding to active predation. This change allowed a more effective hunting and killing with the result that jawed predators are nowadays the top of most food chains. (2). It would be interesting to see if the same neuronal pathways are present in the most effective predators, such as felids, instead or mice, that in most studies have a more dramatic role, be the prey.