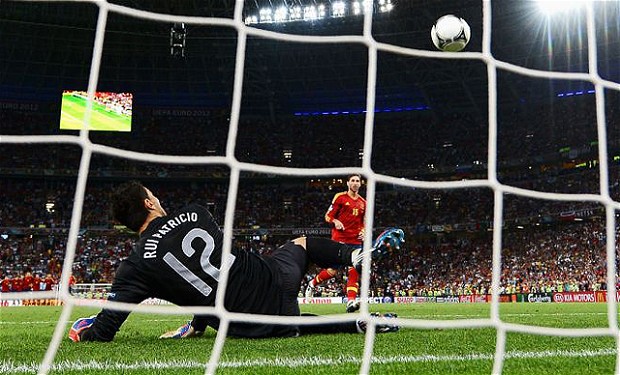 You play rock-paper-scissors against someone. What is the best strategy? Of course, it depends of what your opponent does. If he is someone who always plays “rock”, then you better play “paper”. But if your opponent is not that naïve and searches for his best play, what would you do? The first thing to notice is that you must be unpredictable. The next thing is to compute the probabilities of choosing each one of the options. In this game, since what you gain when you win is the same regardless of your choice it can easily be shown that you have to play each action one third of the times. The same is true for your opponent. Given what you do, your opponent cannot do better by changing his or her way of choosing, and vice versa. This equilibrium situation in which players choose randomly is called a in mixed strategies Nash equilibrium (MSNE).

The Nash equilibrium is central to Game Theory and plays an important role in analyzing economic as well as other social problems. However, the fact that the theory suggests that agents must sometimes choose their course of action at random seemed problematic. Do agents really randomize when the theory says they must? If they do, do they randomize according to the probabilities given by the theory?

There have been some approaches to these concerns. Some deal with empirical research to find real life examples of randomization, some others with finding more complete descriptions of the strategic interaction that may avoid the actual use of mixed strategies and yet others try to test the theory in the lab. We do not have many data regarding the empirical evidence, and the data from the lab do not support well the theory. In this article we will review a different approach: look what happens in actual sport games. They provide us with situations in which to explore the theory, situations that are very well structured, simple, and where players are experts at what they do.

The first such exploration was conducted by Walker and Wooders (2001) 1. In this work the authors study the behavior of tennis players at Wimbledon in the serve-and-return phase of the play. In tennis, the service is a very important part of the game. Although the server can hit the ball to aim at any part of the court in which he receiver waits, most of the hits fall in two categories: left or right. Services are too fast, the receiver has to guess where the ball is going to be, and move there at the same time the server is hitting the ball. If the server plays, say, “left” and the receiver plays “right”, there is a higher chance that the server wins the point compared to the case in which the receiver plays also “left”. Unlike in “rock-paper-scissors”, the win is not certain, but statistical, and the probabilities differ depending on the strategies: “left-right” may provide the server a different probability of winning the point than “right-left”. A tennis match allows the authors to complete a table with all the relevant statistics for all the “server-receiver” strategy combinations: L-L, L-R, R-L and R-R. Because of the asymmetry of the numbers the equilibrium does not need to imply playing the two options with equal probabilities. The results of the statistical tests reveal that professional players do choose their strategies in the correct proportions as indicated by the MSNE theory. However, they do not play these proportions in a really random way, as they tend to switch too often.

The next studies came from football (soccer). Chiappori et al. (2002) 2 use data from 459 penalty kicks in the French and Italian leagues over a period of three years. Like in the serving situation in tennis, the strategies of the kicker and the goalkeeper are considered simultaneous for all practical purposes. The authors cannot test individual data, as a given player is almost never involved in five or more penalty kicks, and all the analysis has to be done at the aggregate level. The authors consider three strategies: left, center and right. Because the goalkeeper almost never stays in the center, a further assumption is made: if both the kicker and the goalkeeper choose “center”, then the probability of scoring is zero. One consequence of MSNE behavior is that the expected gains in each of the choices that are used in the mixed strategy must be the same (if one choice offers a greater gain, then it should be chosen more frequently). The authors do find good support for this prediction.

In a latter study, Palacios-Huerta (2003) 3 provides a more complete analysis. Like Chiappori et al. (2002), he also uses all penalty kicks in the pre-specified period and leagues to avoid any bias (Walker and Wooders, 2001, chose only long matches, which may be influenced by players playing exceptionally well according to the theory). Further, he collects more data: 1417 penalty kicks during September 1995 and June 2000 from professional games in Spain, Italy, England and other countries, including 22 kickers and 20 goalkeepers that were involved in at least 30 penalties each, and that can be used to conduct tests at the individual level. Several hypotheses have to be tested previous to the main analysis. First, there are right-footed kickers and left-footed kickers, so the model renames the “right” strategy to mean the natural side of the player, and both types of players are treated as one after the renaming as no difference in scoring is observed for left and right-footed players. Second, the strategy “center” is grouped with the “natural” side, as players report that they consider center as natural as their preferred side, the “center” strategy is seldom used and alternative treatments of this strategy do not alter the results. Finally, the work includes Montecarlo simulations to check that the statistical tests have sufficient power to distinguish equilibrium play form disequilibrium strategies.

Palacios-Huerta (2003) finds that the two predictions made by the equilibrium theory are met at both the aggregate and the individual levels: probabilities of scoring are the same for both strategies (about 80%), and there is no serial correlation in the choice of the strategy, neither in penalty kicks during the regular part of the game nor during shootouts (series of penalties to decide a tied match), meaning that the choice is as random as it can be. Given the different probabilities of scoring, the Nash equilibrium predicts that the kicker should use his natural side 58.01% of the times, and the goalkeeper should jump towards the natural side of the kicker 61.46% of the times. The observed frequencies are 57.69% and 60.02%, respectively. It should be noted that in this kind of games, this is enough to characterize the MSNE theory.

More recently, Azar and Bar-Eli (2011) 4, confirm the main results with a different set of data, completing the analysis using three strategies (right, center and left), and comparing the performance of the Nash equilibrium theory with different methods for choosing the strategy based on information of the marginal distribution of kicks or jumps. The authors show that the MSNE theory explains the data better.