A key aspect of our effort to overcome autism is to get a quick, reliable and early diagnosis. Typical signs such as difficulty in making eye contact or following the mother’s pointing gesture are usually observed after the age of two years and we also have the problem of the natural variability that exists in behavior and temperament among all babies. Probably we use behavioral diagnosis because that is how autism was defined and because we have nothing better. An article published in the journal Nature on February, 2017 has opened a new possibility to diagnose much earlier: use of brain scanners 1.

Heather Cody Hazlett of the University of North Carolina co-led the research group and this study is part of an extensive project focused on the development of children who have an older sibling with autism. Since the genetic basis of autism is clear, these infants who share a good part of the hereditary profile of their autistic siblings have a higher probability of developing an autism spectrum disorder (ASD) and are therefore considered a high-risk group. 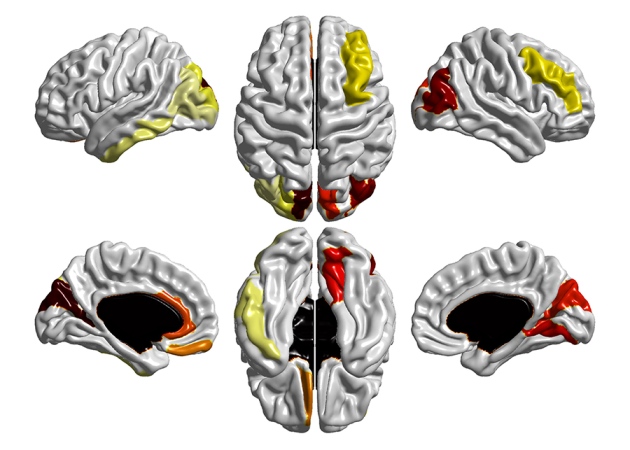 First, 106 high-risk and 42 low-risk babies had magnetic resonance imaging scanners at 6, 12 and 24 months of age and then they were diagnosed for autism using ADOS scale. As is often the case in this “high-risk” population, 15 children, 1 in 7, met the criteria for a positive diagnosis of ASD. The research group then reviewed the brain scanners to see if there were differences between the resonances of children who had been diagnosed with autism and those without autism.

The North Carolina group studied three general measures of the whole brain: its volume, the area of its cortical surface and the average thickness of the cerebral cortex, the outermost layer of the cerebral hemispheres. The study confirmed previous studies in older children, where children with autism were found to have slightly larger brains and more surface area. However, these differences only reached statistical significance in scanners performed at 24 months. That is, the brains of children with ASD grew faster than children without ASD between 12 and 24 months and that accelerated growth occurred at the same time as the first behavioral signs of autism appeared. Even so, the data showed a large diversity in brain size in both groups and most children with autism had brain volumes that did not allow them to be distinguished from the non-autistic group. This indicated that while it is true that children with autism as a group have brains larger than children without autism, this criterion does not allow a reliable prediction of whether a particular baby will eventually develop an ASD or not.

Then the group of researchers developed a strategy: they calculated the volume and surface area of 78 different regions in the brain of each child. These measures were collected both for the scanners performed at 6 months and those made at 12. Together they collected 312 values for each child. What they found was that the area of the cortical surface, measuring the furrows and folds that make up the superficial part of the cerebral hemispheres was different: between 6 and 12 months the cortical surface grew faster in children who were later diagnosed with autism in comparison with those who did not develop an ASD and this difference was especially evident in certain regions: compared to the low risk group, the high risk-ASD group had significant expansion in the cortical surface area in the left/right middle occipital gyrus and right cuneus, right lingual gyrus, and to a lesser extent in the left inferior temporal gyrus, and middle frontal gyrus. At that time there were still no differential symptoms in behavior. 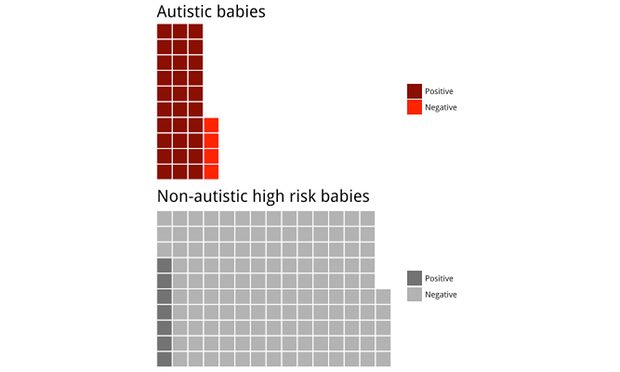 The next phase of the study was to encode these data plus the sex and brain volume of each child and to use an algorithm, a deep learning neural network, that would try to differentiate between babies with and without autism in a larger population. They trained the algorithm with the data of 90% of the babies and then put in the computer the data of the remaining 10% and saw if the program was able to predict the diagnosis of each of them using the magnetic resonance imaging scans at 6 and 12 months. They did it 10 different times, that is, leaving out a different group of babies each time. 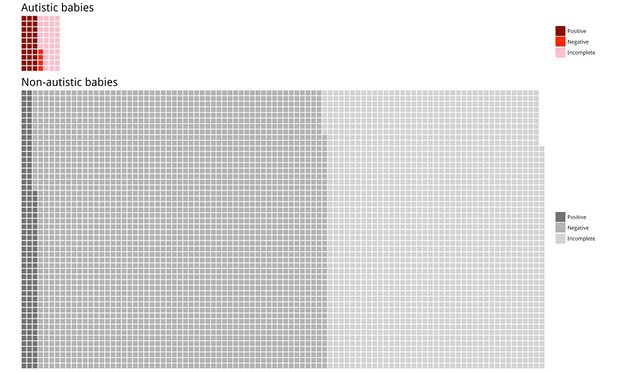 The results were striking. The computer correctly diagnosed with 88% sensitivity (30 of the 34 children with autism were identified), 94% accuracy (168 out of 179 total population were correctly classified), 95% specificity (138 of the 145 children without autism were correctly identified), 81% positive predictive value (30 diagnosed as positive out of 37 predicted) and 97% negative predictive value (138 diagnosed as negative out of 142 predicted). This has generated real international interest in the possibility of being able to make semiautomatic diagnostics of autism in the first year of age.

Will the use of magnetic resonance imaging be used to predict whether a child will develop autism or not? There are some practical problems: scanners are noisy and claustrophobic and any movement spoils the result. The researchers scanned the babies while they slept, but despite extreme care throughout the procedure, they only achieved a pair of resonances of sufficient quality in half the babies. Therefore, if we add these incomplete data, only 30 of the 70 children with autism were identified using their brain scanners, which is a much worse percentage.

In addition, the study was performed on a high-risk population and not on the general population. Considering that 1 out of 68 children develops autism and that to identify the 30 babies with autism they had to start from a population of 70 babies with ASD a similar study on the general population would have to scan a total of 4760 babies (2 times in each case) and 40 babies with autism, which would include those who had bad scanners and false negatives, would not be detected. In addition, by the proportion of false positives, we would have 132 babies diagnosed with autism who actually do not have it. In other words, 81% of babies who tested positive would not have autism. 2

These results should not discourage us. They are the first study and once it is confirmed and replicated in a larger population, something that researchers are already trying to do, it will be possible to improve the success when doing scanners for babies, the algorithm will work better to differentiate between babies with autism and those who do not develop it, and it will be possible that in a reasonable time, but not now, we will be able to diagnose an ASD using brain scanners. Scanners are not a cheap test but in the risk groups such as siblings of children with autism can be an exceptional tool to get early diagnoses and develop rapid treatments that can be evaluated using behavioral tests but also new measures of their brain surface. 3