Cell signalling is the mechanism by which cells communicate with each other and with their environment. Stimuli, which are generally chemical, are transmitted via a signalling cascade to effector molecules that orchestrate the appropriate response. Signalling pathways are not isolated but they rather form a complex network of biochemical reactions that regulate processes such as cellular proliferation, longevity and metabolism of cells, and are also key targets in cancer, having proven extremely successful in the development of therapies used to treat millions of patients worlwide. Popular drugs such as imatinib (Glivec, used for the treatment of chronic myelogenous leukaemia) and trastuzumab (Herceptin, used to treat one specific type of breast cancer) target different pathways of cell signalling.

The problem with using cell signalling as a drug target is the following: in every cancer there is a deregulation of at least one cell signalling pathway, but since cancers are heterogeneous in the way signalling is modified, cell-signalling targeted therapies do not have the same outcome in all patients, and even those that initially respond to a drug will at some point develop resistance. 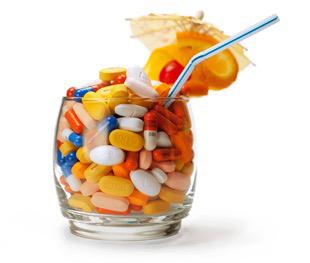 A paper recently published in Oncogene shows some interesting findings about how drug resistance mechanisms are developed in cells treated with inhibitors of cell signalling.1 M. Dermit and her colleagues at the Barts Cancer Institute of London have observed that some cancer cells not only become resistant to drugs but may also become “addicted” to them. Rather than being a challenge, however, this could be exploited for our own benefit.

This research focuses in one important pathway of the cell signalling network: the phosphatidylinositol-3-kinase/AKT/mammalian target of rapamycin (PI3K/AKT/mTOR) signalling that has key roles in the regulation of cell growth, survival, motility and metabolism. Being one of the most frequently mutated pathways in cancer makes it an interesting target for new therapies.2 However, there is a challenge: while many small-molecule inhibitors of this pathway are already showing to be effective in pre-clinical and early clinical studies, previous experience suggests that drug resistance is very likely to happen.3 The aim of Dermit and her group was to study the changes that make cancer cells drug-resistant, in order to understand how they manage to survive when this signalling pathway is inhibited, and to provide some insight on the biochemistry of how this occurs.

It is known that the acquired resistance of certain cancer cells to some inhibitors can be overcome by drug rechallenge after a period of removal, also known as “drug holidays”. This strategy has been successfully used in malignancies such as melanoma and some types of lung cancer. Basically, once cancer cells have become resistant to an inhibitor, it is removed for a period of time, and after this “holiday”, cancer cells become susceptible to the drug again. However, little is known about how it happens at the biochemical level.4 5

This study was originally designed to investigate if the drug holidays strategy would work in the case of cells treated with an inhibitor of the Pl3K pathway, but in their experiments, the authors got to some interesting findings they did not expect. For this research they used resistant cells derived from a breast cancer cell line (MCF7) that had previously been chronically treated with a PI3K pathway-specific inhibitor called GDC-0941. When cultured in the presence of the drug, the cells showed their ability to keep proliferating at a slow rate, as it was expected (when cancer cells become resistant to a drug, they proliferate in its presence, although they do so at a slower rate than the non-resistant cells in the absence of the inhibitor). Surprisingly, upon withdrawal of the inhibitor, the researchers observed that the majority of cells grew at a slower rate than when the inhibitor was present. This was a very relevant finding, since it shows that drug-resistant cells not only undergo changes that adapt their biochemistry to compensate for PI3K pathway inhibition while being treated with the drug, but they also seem to struggle to proliferate without it, thus showing that, in some way, they develop some sort of “addiction”.

It turns out that the way cells try to overcome the Pl3K pathway inhibition has a flaw: whereas they become able to survive and proliferate as long as they are in the presence of the drug, the metabolic changes cells undergo eventually result in increased rates of cell respiration, higher oxygen consumption and the accumulation of reactive oxygen species (ROS) when the drug is removed. The excess of ROS and high levels of free radicals within the cells increases their sensitivity to oxidative stress, hampers cell division, and therefore is detrimental to their proliferation.

Encouraged by these experiments, the group also investigated whether this mechanism applied to breast cancer cells that had developed resistance to another inhibitor, as well as to other types of cancer cells derived from oesophageal, head and neck cancers. After drug removal, nine out of then models did not recover their proliferative capacity.

These results are exciting because they suggest that the defective metabolic adaptation could be a common feature of cancer cells that have developed resistance to signalling pathway inhibition. If that is the case, it could be taken advantage of with the use of new therapeutic opportunities as adjuvant to the drug holiday strategy. For example, a new therapeutic path to follow could be the development of free radical scavenger inhibitors to work as coadjuvant drugs by enabling the drug holiday strategy to delay the occurrence of resistance to existing drugs.