If you have a bike, most surely you will own a helmet too. If you fall off the bike your helmet might avoid some nasty head injuries, right? That looks pretty obvious… except that it isn’t. 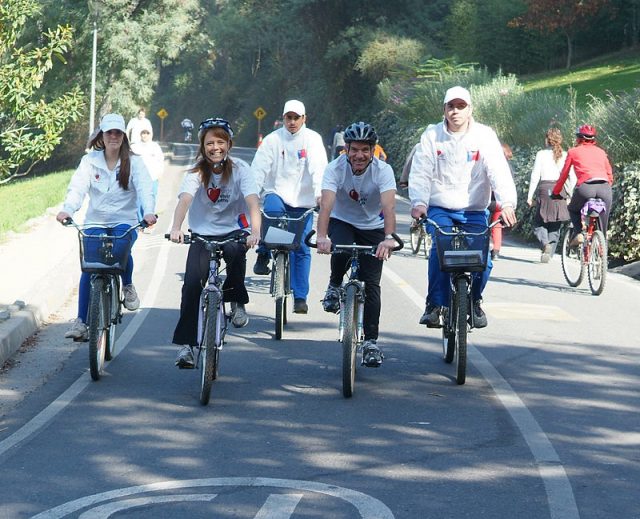 Lets start with a little bit of skepticism, and as straightforward as it seems, we would like some proof of its effect. How would you study this? It doesn’t seem very ethical to push non-protected and protected bikers to the floor at different speeds to see how useful the helmet is. Also, I don’t know what kind of person would participate in a trial like this voluntarily, either. So we have to go for a case-control study, where we get the existing data and try to assess a causality or relationship. For instance, we can get all the cyclists that needed an ambulance and check if they wore a helmet, and what kind of head injury they have; if there is a correlation we might have found evidence of the usefulness of the helmet. These type of studies were developed for epidemiology, but as you can see they can be used in many situations where a randomized trial is not feasible.

And that’s what everyone did. Attewell et al performed, back in 2001 1, a meta-analysis of studies from several countries published between 1987 and 1998 where both head injuries and helmet use were established. They found a statistically significant protective effect of helmets for head injury, brain injury, facial injury and fatal injury. Also, neck injury results were unfavourable, apparently because of the weight of these old fashioned helmets. The obvious conclusion is that helmet should be mandatory, such as wearing seat belt in motor vehicles. And even though countries do not enforce this kind of a law, there are some that have, i.e. New Zealand and Australia, what allows to gather experimental data both before and after the law enforcement date 2 (Figure 1).

Okay, so the scientists in the first article found statistical evidence on the protective effect of helmets, but in New Zealand, after adults increased the use of helmets from 43% to 92%, there was no trend change in the amount of head injuries? Also, most kids were wearing helmet before, so we can look at it from a different perspective: the decline in head injuries for adults has the same trend as for the young ones that have always worn helmet, so the increased safety of helmets doesn’t seem to work when applied in a real case. Robinson 3 has made a good review of the influence of helmet enforcement laws for cyclists, and the results are very similar for different regions in Australia. But there is one paper from 1995 that actually found that head injuries were reduced by 40% in Victoria after a helmet enforcement law 4, which has been used as a proof in favour of the mandatory helmet. However, it has a rather silly mistake: the number of people cycling also decreased significantly. They looked at the absolute values when they should have looked at the ratio of injuries per cyclist!

After all this confusion, no other than The Cochrane Collaboration published a meta-study in 2009 5 trying to put together the results of all the existing publications on helmet safety. The result was, again, that helmets reduce head injuries, by a a percentage even higher than the initial meta-analysis by Attewell. Then, in 2011, Alvik 6 analysed all these meta-analysis looking for a specific detail: the presence of publication bias. All these analyses that gather existing scientific papers in order to draw the big picture try to include every publication that talks about that specific issue, but some works might be ruled out because of a poor quality of the scientific analysis. However, this is quite subjective and thus, prone to bias. Publication Bias accounts for the tendency not to publish studies where findings are not statistically significant, or contradict the expectations of the reviewers, or even because of the interests of sponsors of the research being carried out. Alvik also found Time Trend Bias (findings tend to change over time and if all of them are analysed together, not considering when they were published, the trend could disappear and the global effect could be misleading) and added the latest publications he could find on the subject. The biases reduced the effectiveness of the helmet slightly, and surprisingly, the most recent publications tend to find no statistical correlation between helmet and head injuries, so the overall effect of helmets in scientific publications was reduced even more.

Why are the latest studies finding that helmets might not be useful?

And why don’t helmet enforcing laws change the trend in head injuries? It might be because of external factors, such as how other drivers see you. Walker 7 found that wearing a helmet made other vehicles leave less space when overtaking the cyclist. He also found that when the rider had a long haired wig in order to resemble a woman, they left more space than for men. But again, this analysis was later dismissed by other researches 8, at least regarding the significance of helmet usage. It could also be because of risk compensation: when someone wears a helmet he or she feels more protected, making themselves prone to take more and higher risks. In 9 they found out that people accustomed to cycle rode downhill at slower speeds when not wearing a helmet; and both in this study and in 10 noticed two sub-types of cyclists, the “speed-happy” type (sic), better equipped and more professional, focused on the sport of cycling; and the casual type, which ride shorter trips at slower speed, focusing on the transport mean of cycling. The second type did not change their behaviour when wearing a helmet, meaning that these do not apply risk compensation. Then, when laws discourage casual cyclists (which are the safest ones) the part of the population that doesn’t fall into risk compensation is lower, and thus the overall result makes the effect of risk compensation even higher.

To sum up, according to scientific literature wearing a helmet reduces head injuries, but helmet enforcement laws do not obtain the desired results. This might be caused by casual (and safer) riders not taking their bikes anymore, together with risk compensation in experienced cyclers. These laws do not help to reduce injuries in cyclists, and thus are not cost-effective. The resources allocated for them should be placed in other areas that could potentially help more, such as lower speed limits in urban areas, for example. But still, wear a helmet when cycling, it helps. It’s other factors that spoil the picture.