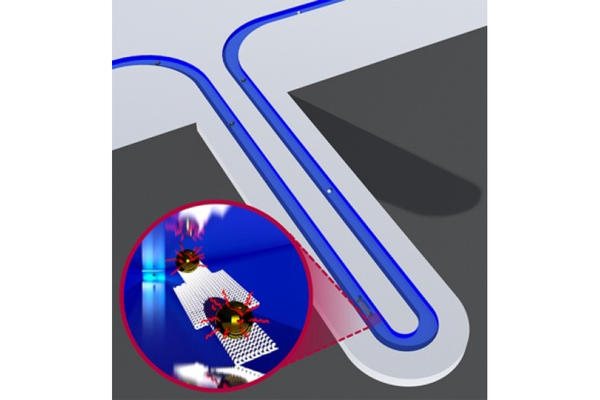 Tiniest particles can now be put on the scale

Tiny technology that uses a fluid-filled microchannel in a silicon cantilever can measure the mass of particles down to the attogram, or one-millionth of a trillionth of a gram. The technology, developed at the Massachusetts Institute of Technology, sends particles through the microchannel. Their passing changes the vibrating frequency of the cantilever, allowing measurement of things such as viruses and nanoparticles.

Robotic flying machine remains stable with only its wing motion

A small robotic flying machine resembling a jellyfish can maintain stability in flight by the movement of its wings alone, according to researchers. New York University applied mathematicians Leif Ristroph and Stephen Childress built the ornithopter, which can fly forward, hover and right itself from tilting by generating a downward jet with the motion of the wings, similar to that of a jellyfish bell. It is, in short, like no other flying machine you have seen before.

Long lives of primates may lie in their slower metabolism

Slower metabolisms may be the key to long lives in primates. Researchers say primates tend to expend 50% less energy during the day than mammals of similar size and shape, and the feature may be a survival mechanism when food becomes scarce.

Birds form a “V” shape in flight and time their wing movements to use their energy more efficiently, researchers say. Using sensors attached to a flock of northern bald ibises, scientists found that the birds perfectly positioned themselves to catch the air created by the flapping bird in front of it, helping it fly more efficiently and adjust to any changes in the front bird’s movements.

ProSavin, a triple-gene therapy that stimulates brain cells to produce dopamine, shows potential in relieving symptoms of advanced Parkinson’s disease. The therapy was tested in 15 patients whose response to existing treatments had waned. ProSavin infuses genes into the brain via modified virus to boost production of dopamine in the area that controls motor function. Though the therapy was well tolerated without serious side effects, additional research involving a control group is needed.